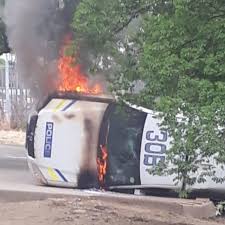 Police say a 52 years old businessman arrested for the involvement in the Senekal protest has previous convictions that relate to stock theft.

The protest was by a group of white farmers who were demonstrating at the court citing lack of commitment by the police to prioritise farm killings in the country. They stormed into to court demanding for the release of two suspects accused of killing a 21 years old farm manager.

They then later on took the protest to the local police station where the police van was overturned and burnt.

The said businessman is the only one to be arrested from the protest on charges of malicious damage to property and public violence, but the court heard on Friday during his first appearance that he now faces two additional charges of attempted murder and terrorism.

His face and name was asked by the court to not be revealed to the public pending final decision on his bail application.

The Senekal Magistrates Court heard through an affidavit that the said suspect owns a construction company and suffers from bipolar and is on chronic medication.

He admitted through his affidavit read out by his attorney that he has a theft conviction passed down in 2011 which was wholly suspended for three years on condition that he paid the money back.

The court also heard that inmates who were in the cells got injured during the time this group of protesters forced entry demanding the release of the two suspects.

This also led to one female officer getting injured after being pushed and throttled, allegedly by the said suspect.

His defence has however dismissed these claims accusing the investigator of rushing to arrest without thorough investigations.

State said the suspect shouldn’t be released on bail taking into consideration the amount of damage that was caused, judgment on the application has been reserved until Tuesday.