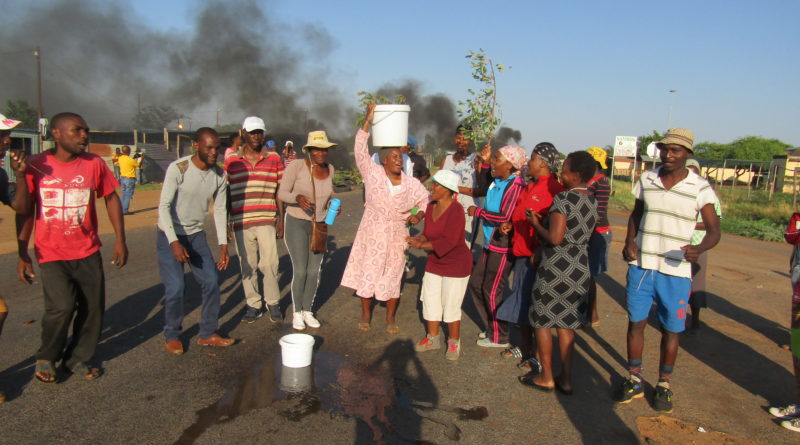 Tensions are running high in Madibeng Local Municipality ward 35 Oskraal as residents take it to the streets to disturb the daily operations to air out their dissatisfaction from the municipality citing poor service delivery.
The community woke up at 3am to shut down roads to seek attention from the national government and provincial.

Speaking to leader of the protest Richard Lebese he said that they are tired repeating their dissatisfaction to municipality on one thing over and over.
“We are being denied our basic right which water & sanitation, surprising enough boreholes were drilled over a year ago but still we are not getting that water”
“They are using an excuse that they drilled boreholes on a privately owned land we asked them to buy that land and they are refusing” he said.
The municipality has been under administration for the second time.
Among seven demands mentioned in their memorandum the community are asking for resurfacing of the provincial road between  Erasmus, Hebron, Rabokala Letlhabile to Klipvoor, paving of  internal roads in Kgabalatsane, implementation of poverty alleviation programme across all villages.
Mr Lebese added that the issues they are raising now were raised before and they also showed us three memorandums that were from 2017 one which was sent to the office of the President and has stamp to show that it was received.
“Premier Mogoro must come here and listen to our demands or the President Ramaphosa himself”
“We won’t stop until we are heard we don’t care who gets affected negatively” he said. One granny from the community said for them to get clean they have to pay R 250.