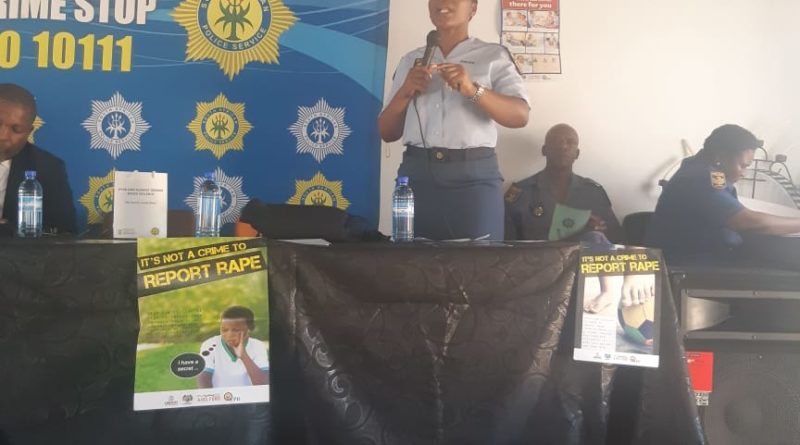 Ensuring safety and security to all in three sectors remains one of the top government priorities as it intensified its efforts top stop crime in all levels. MMAMETLAKE SAPS’ concern is the alarming rate of violence against women, children and the vulnerable people.
These are the words expressed during the Gender Base Violence awareness Campaign on 17 October 2019 at Phake (Sector 2). The presentation by various role players outlined the call by Station Commander upon communities to play part in fighting gender base violence.
Domestic Violence Officer Sgt Skhosana highlighted during her presentation that to further reduce violence on the vulnerable groups the law enforcement officers in Mmametlhake have committed themselves in educating and sharing information with community to deal with the issue.
“The station further raised concerns about the reports of sexual and domestic violence which continues to undermine women and children. More concerning is that these kinds of crime happen in our homes and are committed by people who are known to victims” she said.
Mr Rahube Senior Public Prosecutor (SPP) in KwaMhlanga Magistrate Court present on the day urged community to report these crimes and provide full information so that perpetrators may be brought to book and be punished according to the law.
Speaking at the event there was also a survivor of domestic violence Mrs Madileng from Marapyane who saluted the police in Mmametlhake who generally did well in her case where her husband was sentenced to 15years imprisonment in 2014.
The survivor told the attendees that it is a miracle that she is still alive today after surviving  08 gunshots by her then husband.
Mrs Madileng said that this happened during a day that was planned to be a good day at Bela-Bela. Her husband shot her 8 times while driving in their car and dumped her near a bridge in Nokaneng in 2007.
She further encouraged women to stand up and fight gender base violence and also empower themselves and each other as women.
The sermon was read by Pastor Happy Kalonda who praised police for their efforts in fighting crime with the little that they have and that the community must work with SAPS to fight against Gender based violence.
In conclusion Communication Officer Sergeant Tlaki Matemane urged people to speak out and also provided emergency contacts.

Hotline:08600 10111Child line : 08000 55555
AIDS Helpline : 0800 012 322
Stop Gender Violence:0800 150150
100 ministerial six point plan pamphlets were distributed, 150 pamphlets with information on breaking the silence on sexual offences were also distributed as well as domestic violence pamphlets.
The event was closed with the slogan: Ayihlome against gender base violence!! Do not be ashamed or scared, it is not your fault. There is help available.