The Department of Labour has invited comments on the Draft National Labour Migration Policy (NLMP) and the Employment Services Amendment Bill (ESAB) by Saturday 28 May.

In this article, we answer key questions you may have about the policy and bill.

The Employment Services Amendment Bill goes hand-in-hand with the NLMP and has been created to make it legal for the government to regulate the employment of immigrants in South African businesses.

This means that quotas can be introduced, limiting the employment of immigrants and compelling employers to employ South Africans instead. This has been a controversial aspect of the proposal.

Also related is the National Small Business Act, which seeks to limit the involvement of migrants in the informal sector. Foreign nationals will be banned from starting businesses in some sectors.

Anyone in South Africa can submit comments to the Department of Labour, by emailing a written comment to NLMP@labour.gov.za by 28 May.

The Department of Labour is mandated to consider the comments submitted by the public before the NLMP and Employment Services Amendment Bill are finalised.

The draft policy explains that migrant labour has been a vital part of South Africa’s history and before 1994 was governed by apartheid laws.

Since democracy, key changes have been made to the migration laws, but a comprehensive migrant labour policy has never been created.

This has led to “reactive” interventions rather than policies to ensure the South African economy fully benefits.

Migration in South Africa has also changed over the years. The decades-old migrant labour system in South Africa’s mining industry is slowly being phased out, and an increasing number of low-skilled immigrants from SADC countries and new immigrants from Asia are entering the country in search of opportunities.

South Africa is the largest host of immigrants in Africa, with an estimated 4.2 million international migrants living in the country in 2019 according to the United Nations. That’s about 7% of the population. This includes people from other countries who have become South African citizens.

These phenomena, among others, are listed as reasons for a comprehensive labour migration policy.

What does the Department of Labour want to achieve through the new policy?

Secondly, the NLMP creates a framework to strengthen the collection and analysis of labour migration data, attempting to put an end to years of insufficient monitoring. This data, the authors of the policy claim, will enable better-informed policy-making.

Thirdly, the policy claims to set out to make labour migration more beneficial to the South African economy, through interventions that attract and retain skills into the country while also introducing quotas to “protect employment opportunities” for South Africans.

Businesses that do not adhere to the quotas on foreign workers could be fined up to R100,000.

At the same time, the policy claims to propose interventions to improve the living conditions of immigrant workers, and to fight xenophobia.

Finally, the NLMP states that it will attempt to stop the “brain drain” from South Africa by designing incentives for citizens to stay in South Africa, or to come back if they are already working overseas.

The policy notes that migrant labour is essential to the economy, as many immigrants possess critical skills that are scarce in South Africa. The policy aims to attract and retain these skills for the long-term benefit of the economy, leading to a “brain gain”.

There is also a growing concern among economists that skilled South Africans are leaving the country, thereby causing a “brain drain”. The policy proposes that South Africans should be encouraged to stay in the country or to return if they have left.

The rationale is that through the retention of important skills, the South African economy is able to grow and innovate.

The draft policy undoubtedly intends to crack down on immigrants unlawfully working in South Africa.

When announcing the draft NLMP, the Department of Labour said the bill will attempt to “address South Africans expectations” in the face of “the perception that foreign nationals are distorting labour market access”.

The draft policy comes at a time in which xenophobia is brewing, with the recent killing of a Zimbabwean man in Diepsloot and a growing “South Africa first” sentiment.

The NLMP claims that it will improve the lives of immigrants by putting an end to the exploitation of migrant workers and by making available more opportunities for legal employment. At the same time, the job-protection interventions are designed to address anti-immigrant sentiment, the writers of the policy claim.

A critical skills list will be used to open avenues to legal employment for immigrants who possess certain skills. But quotas limiting the number of immigrants working in some sectors, and regulations compelling employers to choose South Africans over immigrants, will also be introduced.

This has caused concern that this will actually contribute to xenophobia and make life more difficult for immigrants living in the country.

The Minister did not offer data to back this up and the NLMP does not either. Mainly because such data does not exist due to insufficient recording.

This article was originally published by GroundUp follow the link to read more about it. SASSA not processing new applications for the R350 Covid grant 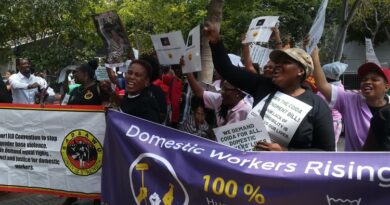