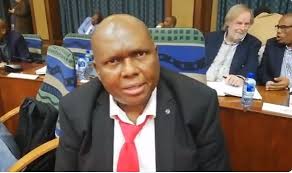 UDM’s Nelson Mandela Bay mayor Mongameli Bobani ousted through motion of no confidence. This was the fourth motion against him.

The municipality has been led by two mayors from different parties since the last local elections in less than three years both of which were axed through motions of no confidence.
The motion was tabled by the Democratic Alliance whose mayor was also axed through motion of no confidence.
He was also accused of leading a corrupt coalition to which he denied.
Bobani only got the sit in August 2018.