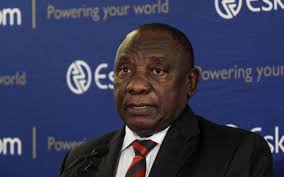 Presidency has announced that President Cyril Ramaphosa has cut his Egypt work visit short to attend to the recent crisis which power utility Eskom has found itself in.

The president’s visit was announced yesterday just after the utility announced stage 6 load shedding in the country.
Ramaphosa is currently in Egypt to attend Aswan Forum for Sustainable Peace and Development Conference which was scheduled to take place on tomorrow, Wednesday.
Eskom has recently found itself on the wrong side of the general public on the recent blackouts with other parts of the country being left out of electricity for over four hours. This has also affected businesses that are forced to close down as they do not have alternative power supplies.
Mining companies namely Impala Platinum and Petra Diamond have been forced to shut down citing
lack of adequate power.