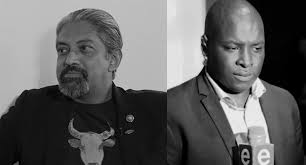 This was after an outrage that occurred on social media which was sparked by a post that was posted Pillay on twitter allegedly calling former eNCA political reporter Samkele Maseko a rat after he resigned. He said in his post that “Rats swimming towards sinking ship” referring to the SABC as the sinking ship. Maseko then responded to the tweet where he also outlined how he was badly treated and escorted out the premises.

The news channel together with its parent company eMedia Investments issued a statement yesterday expressing their disappointment about the incident and dismissed Pillay with immediate effect after he also issued a statement of apology to Maseko and the SABC.

Speaking Power987 Maseko said the move by the channel was the right one and also added that he isn’t and wasn’t the only who had problem with Pillay and that many of his colleagues were afraid to speak out.

The debate also sparked the conversation on Pillay, a politician, who is a founder of a political party being appointed to lead news department. The flaws of the appointment started to show when newsroom and journalists/reporters were told to not cover EFF National Peoples Assembly a week ago.

The channel said through their statement that they take issues of censorship very serious and they wouldn’t to find themselves in a situation where they are censored.

“After an intense overnight investigation and consultation, the channel decided it had no alternative but to end its relationship with Mr Pillay. Although he was acting in an individual capacity and his posting was unsolicited, he was nonetheless a senior member of the staff and the channel believes there was no room for any outcome and that damage control was imperative” said the statement.

Media monitoring South Africa called on eNCA to do self-introspection on censorship allegations.