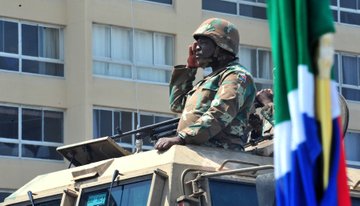 DA’s leader John Steenhuisen has accused President Ramaphosa and the intelligence of sleeping on the job for not acting beforehand on the current unrests and criminal elements that are currently taking place in the country.

Seeing that the South African Police Service (SAPS) is unable to handle the current lootings, the party has called on the Commander in Chief President Matamela Ramaphosa to deploy the army so as to restore order.

“Credible domestic intelligence would have predicted this outcome, not to mention the fact that much of it was announced and widely encouraged on social media. What we are seeing now from law enforcement is a frantic and uncoordinated response to the violence, as opposed to a focused approach based on intelligence.”

“It is critical that government and law enforcement get ahead of this curve, and that President Ramaphosa takes immediate steps to quell the violence and looting.

“The DA calls on President Ramaphosa to:

Steenhuisen concluded that the President’s speech in calling for calm is not enough and clearly did not work.