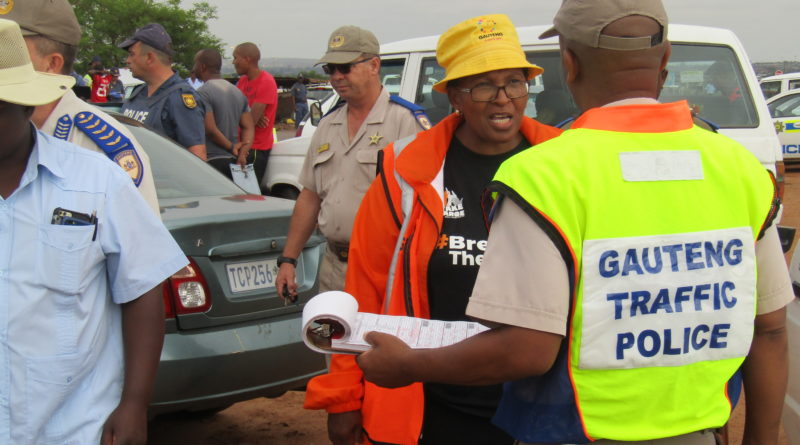 Gauteng police conducted a full force operation #OkakeMolao earlier today in Tshwane, Soshanguve, Ga-rankuwa and other parts of the region. The operation started at 6am where several traffic fines were issued against those committed offences on the road.
Accompanied by Gauteng MEC Faith Mazibuko and immigration services, vehicles with expired discs were also found on the road and impounded.
The operation started on the 13th of November according to information at our disposal, 165 officers were deployed together with 1170 other members and 609 vehicles.
Speaking Gauteng Police Commissioner Lietanant-General Elias Mawela he said the operation is nothing new, it is just a continuation of some of the other operations they have been on for quite a while now and do regularly.“The aim of the operation is to make sure that we remind people that they still need to follow the law.
Often we are accompanied by Gauteng Premier David Makhura and today we were accompanied by the HOD and MEC Mazibuko”
“We chose Akasia station today because it is in the priority list top 40 in the province top 30 priority list nationally.”
Lietanant-General Mawela also added that they managed to impound over 7 vehicles that had VIN and engine numbers that were suspected to have been tempered with and discontinued several minibus taxis that were declared not roadworthy by traffic department.
Over 600 suspects whom had warrant of arrests issued against them were arrested since the beginning of the operation yesterday.
“The police also paid a visit to some of the spaza shops locally and some shops were forced to close down after discovering that the owner was selling counterfeit food, and we also visited some of the liquor stores” he said.
Officials also impounded a bakkie that had fake disc and the owner had expired asylum seeker documents, he said that he wasn’t aware that they had expired.