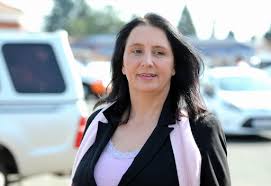 A former estate agent, was found guilty of crimen injuria after using the K-word more than 40 times during an altercation with a police officer in 2016.

Police officers were trying to help her at the time as she was involved in a smash and grab crime. She said she didn’t want to be assisted by an African police officer but rather a Caucasian.

A warrant for her arrest was issued on 1 August after she failed in her bid to appeal a crimen injuria conviction and two year jail sentence.

She was supposed to hand herself over to the police 30 days after that, to which she failed. Police couldn’t find her at an she listed as hers, but she later handed herself over.

Momberg was however freed in December on special remission of sentence announced by President Cyril Ramaphosa on 16 December.

Speaking go another media house, Momberg’s lawyer said they will also be including correctional services minister Ronald Lamola in the lawsuit.