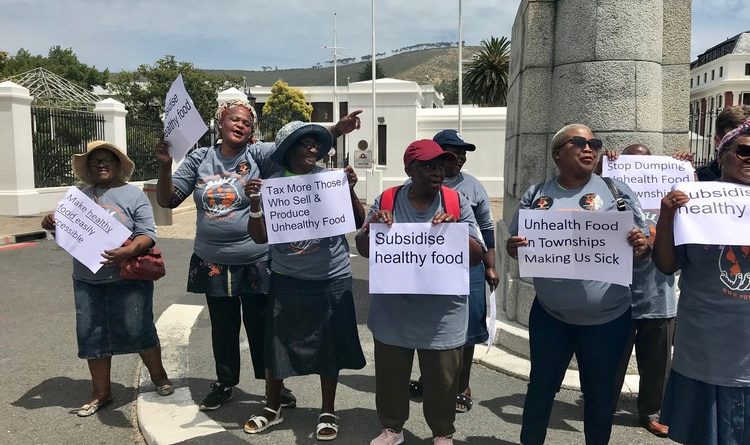 About 20 people picketed at the gates of Parliament on Tuesday to highlight an increase in cases of malnutrition and health risks related to obesity in townships.

The picket, organised by the People’s Health Movement South Africa, also hoped to raise awareness about the importance of household food security and the impact of poor nutrition, particularly for young children.

Protesters, who came from Gugulethu, New Crossroads, Nyanga and Philippi, also called for a restructuring of the market so that small scale producers could supply goods directly to markets “without being squeezed by big companies who enjoy advantages in subsidies, markets and non-competitive behaviours”.

Nowhi Mdayi who works at clinics across Cape Town including in Heideveld, Manenberg, Gugulethu, and Nyanga, said more children as young as nine are being diagnosed with diabetes and other conditions related to obesity. She said that vendors stationed outside school gates also damaged children’s health with goods like chips, russian sausages and magwinya (vetkoek).

“We have been making cooking demonstrations on healthy food preparation and training people to produce their own vegetables. But we want the government to intervene, monitor and fine people who are selling and dumping unhealthy food in townships,” she said.