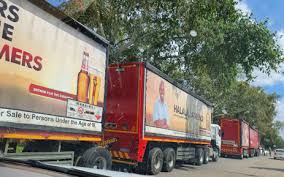 As people fight the edge and their alcohol thirst in this lockdown where alcohol sale was banned, South African Revenue Services (SARS) also say they have made huge losses in tax collection.

The SA Breweries however also lost huge tons of profits which they were forced to flush down the drain.

The alcohol beverage industry as a whole is suffering huge losses because of the ban on the sale of alcohol since the National State of Disaster was declared by President Cyril Ramaphosa two months ago.

The company made an announcement that they are forced to pour alcohol they have been storing for while, down the drain.

Vice-president of corporate affairs at SAB Zoleka Lisa says that unfortunately current lockdown regulations prohibited them from transporting the alcohol for safe keeping.

“Currently, SAB has 132 million litres of beer, equivalent to about 400 million bottles of beer – sitting in tanks. Lisa said if SAB was not able to resume transporting inventory in the next 48 hours, it would be forced to discard it, at a loss of an estimated R150m to the company.”

“It is sad to see that some of the outlets had to make tough decisions and we might see lot of people losing their jobs too. The industry employs about 250 000”

The company also added that the government is also losing around R 500m they would have collected.

The banning of alcohol sale also saw government being taken to court for the lifting of the ban. Various outlets have also been broken by people looking to satisfy their edge.